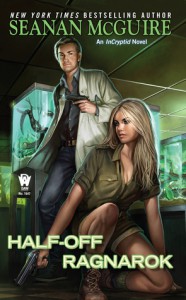 Half-Off Rangarok is the third book in the InCryptid series and has a change in narrators and locations no longer are we in New York with Verity but with her brother Alex, in Ohio.

The story line picks up maybe a month or two after book two. Alex Price is living with his grandparents and Sarah trying to have some semblance of a life while overseeing a secret basilisk breeding program. For Alex somethings are going well Sarah is getting better other things are challenging like keeping secrets from his girlfriend Shelby about who he really is. Then it all kind of goes downhill when Alex is faced with dead bodies that are turning to stone and the realization someone is trying to kill him too.

This book is interesting with a band of characters Shelby and the grandparents are total hits. We learn about new cryptids which were kind of fascinating.  Things that I missed were the mice I liked all of their crazy holidays while they are in the book it is more like a passing thing. I also preferred the New York setting this was supposed to be in Ohio but I think the setting could have been anywhere for me I had trouble relating.

My biggest overall challenge of the book was despite how good the writing is for me there is something missing between characters for some reason I was just not as vested in the outcome.