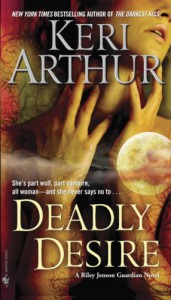 I started this book a few years ago and put it down. It felt like groundhog day. Another murder, the CSI people are investigating, Riley cannot control her hormones...round and round it goes.

About the story, Riley has been brought in to investigate a series of vampire killings, what is odd is these are not young vamps but older pwoerful ones. It gets more complicated when young girls are coming up dead it appears that zombies are actually committing the murders. Meanwhile Kye, a bounty hunter from Riley's old pack has been hired to track down the killer. Which places Riley and Kye in close proximity to one another...the timing could not be worse as Riley is trying to cement her relationship with Quinn and the full moon is coming...

This really could be a stand alone book, like I said it has been a long time since I read the last one yet I had no problem keeping up with this story. This mystery in this one seems slower than I recall them being but it was still interesting. Ironically I found myself getting annoyed when we took a break from the case to deal with Riley's personal life.

Riley's personal life is still as annoying as ever.This idea that she is ruled by her hormones just bugs the crap out of me. Of course there us a twist at the end but honestly I am kind of wishing Quinn would find himself someone who wants to fight for only him. Sometimes it seems like Riley throws Quinn under the bus with he cannot give me babies (like she could have them anyway??) and I cannot have a family with him...uggg it is so lame.

While it was an interesting story line Riley just brought me way way down.
Tweet