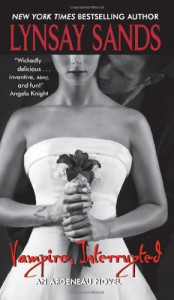 Marguerite Argeneau is now trying to find her own life after a dismal 500 year long marriage. She has raised her four children and helped them find lifemate and now she wants her own adventure. At Christian Notte’s request she decides to try her hand at becoming a private investigator. Christian is on a mission to uncover what has happened to his mother. He has tried asking his father Julius but all he will say is she is dead. What Christian does not know is that his father keeps secrets because he wants to protect Christian from the truth; but Christian’s quest will cause Julius and Marguerite to come face to face and the secrets Julius has tried so hard to keep hidden will come to light.

This is my favorite book so far in the series. The plot is much more complicated than previous books. Marguerite has always been this meddlesome woman in her efforts to see her children happy, the story really uncovers why she has been so insistent that her children find true love. Christian is also quite the interesting character and I cannot wait to see what happens to him in upcoming books. The mystery in this story was also quite good, I really enjoyed all of the twists and turns it kept me guessing. The love affair between Marguerite and Julius was a different type of attraction it felt more like an old glove while it was still passionate it just felt different but in a good way.