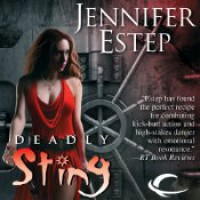 Our story starts out with Gin moping …she misses Owen and while she is trying to hide it. Her friends and family can feel her despair. Finn tries to shake things out a bit by manipulating her into attending an event where all of Mab Monroe’s treasures are being showcased…which is awesome because Gin has to get a dress! Finn and Eva also have an ulterior motive of getting Gin and Owen to talk.  Which does not go so well since Owen has a date and then there is a heist by a group of giants. The giants are banding together because they are sick of being body guards and being taken for granted so they are taking their place in the criminal empire…or so it would seem.

As I read this book I kept thinking of the movie Die Hard and in the end it works out, actually I think it more than worked out the book is a lot more fun than some of the others. I listened to it on audio and as always the narrator Lauren Fortgang does a great job bringing the story to life. It is funny I am not sure if they switched narrators that I would continue with the story. Anyway back to the book the story is very succinct and the plot has a good solid pace. This book could have easily been a novella but the plot was strong enough to keep me entertained throughout the entire book. This time around Gin actually felt more like an assassin, even though she was still bumbling around it made much more sense.  It was also nice to see Gin getting mixed up in something where it was not about someone trying to kill her for revenge or an elemental trying to collect power. While she does not get any new powers in this book she seemed to use her stone and ice magic with a lot more finesse. It was also wonderful to see how she choose to deal with Jonah he has been a burr on her butt for a long time.

While I enjoyed the plot of this story I did not care for the lack of growth in the characters. At the end of Widow’s Web one could understand how and why Owen was mixed up and confused. After certain events in this book he should have been crystal clear and even at the end there was a lack of resolution. Add to that Gin still has a need to shoulder everything emotional on her own shoulders almost to the point where it does not make sense. Speaking of things that don’t make sense is Gin can freeze and object and make it animate to a degree so why can’t she just freeze people? The water villain in the last story did it was water so why not ice??

While the lack of character growth was disappointing I did enjoy the overall story. It looks like we have a new nemesis on the scene bringing about a new story arch which could be interesting.